Dice Roller for FFG Star Wars- Edge of the Empire, Age of Rebellion, and Force & Destiny

Fantasy Flight Game's Star Wars: Edge of the Empire, Age of Rebellion, and Force and Destiny has enjoyed extremely healthy support from it's fans.


This one is an online dice roller that is intuitive, attractive, and effective.

The game system is a form of a dice pool mechanic, so as expected, one simply clicks on the dice you'd select to build the pool. Then click on 'ROLL' and watch the graphical randomizing go for a few seconds before it spits out a random result along the bottom.

The example above called for one Proficiency die (yellow), two Ability dice (green), one Challenge die (red), and two Difficulty dice (purple). Note that the unselected dice are shaded. When you click on a die to select it, it appears clearly or highlighted. The string of symbols along the bottom are the calculated results minus the symbols that cancel each other out. A nice feature is if you hover the cursor over any of the images, a box with a label appears.


Another cool feature is the ability to view the probability of the result.

A very solid gaming tool for the Star Wars RPG. I'll be using it and look forward to seeing more like it. 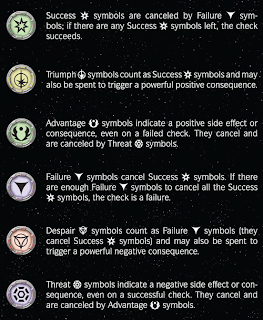 Here is alternate one just in case the above one goes 404 again. alternative... 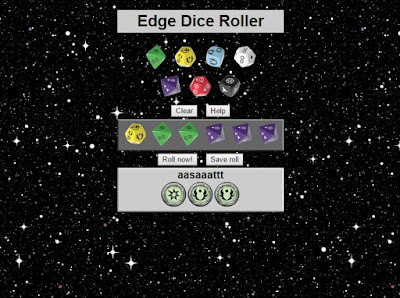